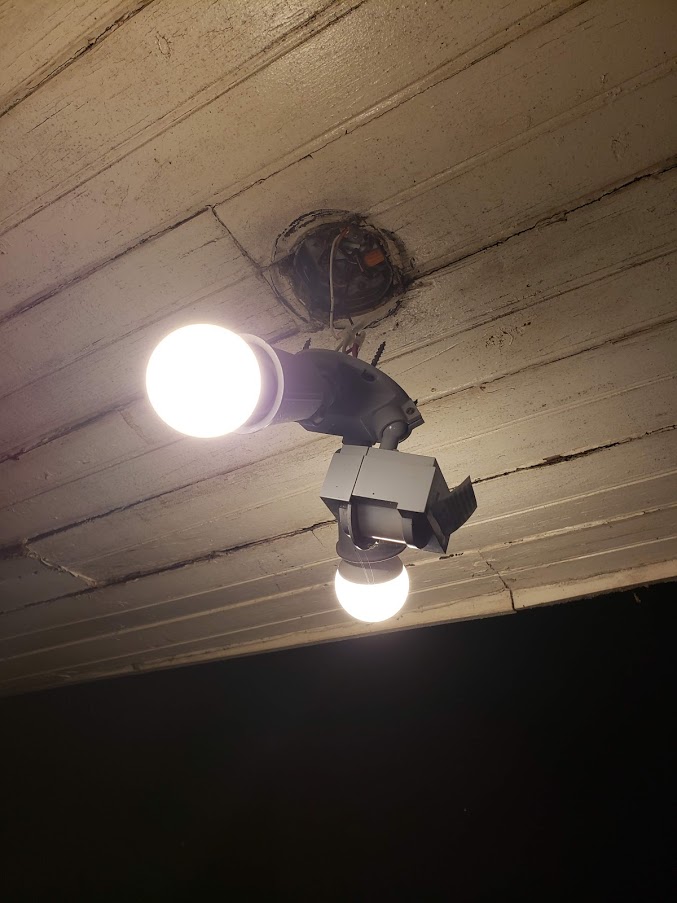 There’s a saying from that annals of rural southern mythology that goes something like “If the porch light’s on, come on in.” I think this statement is designed to promote the idea or heritage of rural hospitality. The idea that country folk will welcome anyone in need need into their homes.

I can, with some certainty, let you know that this is not a reality. Should a stranger wander into someone’s rural home (either now or in the past) they are not likely to be welcomed with food and drink. Instead it will likely be shock and weapons that greet them. And, while this feels stereotypical, it also seems like a normal human response to someone walking into a home unannounced and uninvited. Should it be someone the resident knows–family or friend–this might be different. Still, I don’t think this is the most interesting meaning we can pull from the porchlight glowing in the night.

Instead, perhaps the porchlight is a reminder that the day is not done. Not everyone is home yet. When my dad worked late or when I was out late as a teenager, the porch light was left on. Even Motel 6 had a slogan “We’ll leave the light on.” The motel change used this slogan to let you are welcome to stay (for money), even if you get in late. Rural people intentionally do not close the day until everyone is home. Yes, this is true elsewhere, but rural lights must be intentionally left on, as opposed to street and building lights of urban areas. The intentionality of waiting and the expectation of someone getting home from a long day’s work highlights the values of loyalty and community. People will not lock up the house, turn out the lights, and go to bed, because not everyone is home yet.

I think this symbolism of rural families leaving their lights can expand to the the idea that rural communities are not done. They will not be snuffed out by a society that is far more metro-centric and labels rural communities as backwards and of little value. Tex Sample (in line with Bourdieu) names country music as a dominated aesthetic as opposed to a dominant aesthetic. He also names hip hop, rap, and blues as other forms of dominated aesthetics. This idea of dominated aesthetic can also tie to the way lights are used in rural areas. In this instance, leaving the porch light on is a reminder that people still live here, and that their days, work, and lives are not done. People are still here, life is still being lived here.

Throughout the pandemic and the election cycle the New York Times, NPR, and other national syndicates have continually painted rural areas either empty or backwards (I won’t link them, because I don’t want clicks on those articles). Moreover, there are several emerging narratives of people moving back to rural areas to start over or begin new lives. While I support this–I moved back to a rural area after my coursework–the media often depicts these narratives urban/cosmopolitan folk moving to rural areas and bring them culture and sophistication, as if there is not culture or heritage already present. The lights are reminders that people, heritage, and culture are already present. Life and art are happening all the time apart from and sometimes in opposition to the metrocentric idea.

This acknowledgement that these bones can still live, and that they never died, is a responsibility of those in rural ministry. Rural faith communities hold the power to acknowledge that rural life is still viable and Spirit filled. They can be the one’s who turn the lights on, and leave them on. My hope is that they know how.